A different design and build project for the workshop came in the form of Kayak-Kings cardboard kayak competition. Simple guidelines for the build use only cardboard held together with environmentally friendly glue and gaffa tape for the seams.

We collected up as much cardboard as we could freely get our hands on and set to building we chose a classic kayak shape. 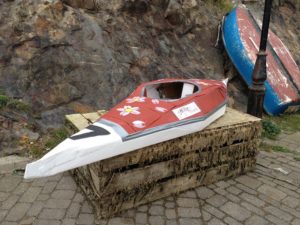 We took up the challenge seriously and keenly over tea breaks the maths of the design came together. 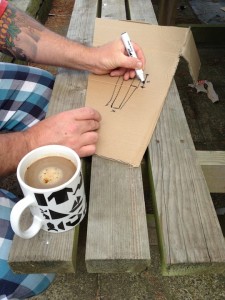 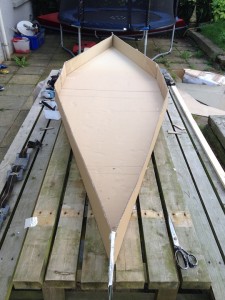 Using myself as the template for sizing, extra support and strength was built up allowing room and comfort whilst on the water, multiple layers of cardboard were used to strengthen along the lenght and edges. Once the main structure was built we took to decorating the boat with painterd cherry blossoms and racing number 7. We were really looking forward to seeing how well the boat floated but had to wait till the day of the competition. 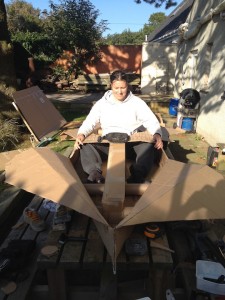 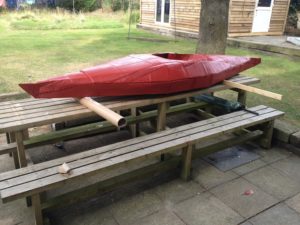 The competition was held down at Fish Guard, Lower town Quay, the boats were scritinised by Ant of Kayak-King and once all were gathered the first race was a sprint out around a bouy. All of the boats but one (which was built in 50mins moments before) sucssefully made it round the course in good time. Neils boat which was built in 50mins won the “Titanic” award with a spectacular launch and quite an impressive and quick sinking. We won the sprint with Kayak-King and Spearhead coming in second and third.

All the boats fit for another round headed in to the main race, a course around three bouys the simple aim of making it to the finishline. A few boats faultered to make it to the finish and were helped out by the Kayak-King rescue team but those who made it were then part of the last kayak standing destruction derby where the last boats floating were, Making headlines, Octocox and Spearhead.

The day was finished off with award presentations and a Hog roast and refreshments with Cafe on the Quay, so glad we took part it was a great day.

It was great to see so many participants and spectators for the first year and I can see that many more participants will be attending next year will we see you?

Check out more pictures over on Sakura worshops facebook

Get a race eye view from our youtube video